OTEC? You have no choice. They own you. 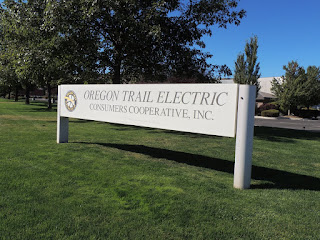 This blog is intended to be a view of Baker City, Oregon, from the perspective of the disenfranchised, and taken-for-granted citizens of Baker City. Critiques will be generally aimed at the powerful and in many cases, the self-serving hypocrites who run this town, from the business people on our Disneyland Main Street, to the subsidized and catered-to flim-flams who take over our public assets and spaces while calling themselves "artists," to the monopoly electric co-op which steals from the poor to feed the rich, and the golf course which does likewise. Harsh, I know, but you would have to see them in action and follow the tragic descent in the quality of people who run for City Council, from self-dealing business people and artists, to drunks and petty criminals, to understand the situation.

I'm just learning how to use the new format in this first blog, so I thought I'd start by posting my last three letters to the editor about our unregulated electric co-op, Oregon Trail Electric Cooperative.

Due to the inaction of the generally apathetic and intimidated members of the co-op, the administrators and board have been able to pump up their compensation while unfairly penalizing residential singles and couples, including low income elderly, who conserve electricity, while benefiting irrigators and other users of large amounts of electricity in the rural areas. In other words, the co-op has been co-opted by a relatively few people to serve their own interests.

The letters to the editor below are constrained by word limits imposed by the newspaper editors, but in the future I intend to revisit them to flesh them out. But for now, here they are:


To the Editor
Baker City Herald


To The Editor:
Oregon Trail Electric Consumer’s Cooperative (OTEC) members and customers have experienced increases in OTEC’s  monthly “delivery charge” on their monthly bill in recent years. In a little over 8 years, accompanied by an impressive propaganda campaign, OTEC has raised this fixed charge, the money you have to pay OTEC just to buy electricity, by almost 300 percent, from $10 to $29.50/mo, and they would like to raise it even higher. Idaho Power’s monthly charge is $8 for Oregon residents and even less in Idaho. Public Utilities Commissions in the various states tend to keep these monthly delivery charges low and recover most delivery costs through a tiered rate system based on usage and its benefits, but electric cooperatives are for the most part unregulated monopolies that have little oversight from the Public Utility Commission, so they get away with the practice.

OTEC constantly reminds members of our low rate for electricity used, but figures from OTEC tell another tale: because of our high delivery charge, more than half of OTEC members would have a lower bill if they were with Idaho Power under its current rate structure. That’s you if you average less than 1000 kWh a month.

Consumer Reports commissioned a study of these fixed charges that indicated that higher fixed charges are inequitable, increase the bills of low usage customers like singles and elderly the most, and disproportionately impact the poor while reducing incentives for energy efficiency.
There are expenditure changes that could help lower fixed charges and OTEC member’s bills though.

Another place to look are programs unrelated to OTEC’s purpose of providing power and assisting members with their electricity infrastructure needs. OTEC spent $655,681on these unrelated programs in the last 5 years.
Christopher Christie
Baker City

I recently listened to a program host ridiculing controlled elections in the old Soviet Union by saying they had to throw a party and serve food at the polling stations to get anyone to vote. As an observer of OTEC's election process over the years, I must say that the charade is similar, except that OTEC also bribes members to vote with a $500.00 prize drawing. The bribes are understandable, given the usual slate of incumbents and the obstacles OTEC has erected to keep candidates from running.

OTEC's 4-month election period begins quietly with the appointment of a secretive, elite "nominating committee," whose task is to determine if you are "qualified" to run. They could actively reach out to members to find potential candidates, but little if any effort is expended for that. Sometimes a director retires early so that an insider can be appointed, giving them incumbency status and a leg up in the next election. The result is that often the only choices on the ballot are incumbents, but in one case where another well-qualified candidate was in the race, important experience was left out of his Ruralite profile.

The bylaws allow additional nominations not less than 60 days prior to the annual meeting if a member can get over the next hurdle which is to collect 50 member signatures by petition before the end of the time period. Several years back, there was a candidate who was told that nominations were closed even though the nomination period was not over. He then had to go out and find 50 members to sign a nominating petition to get on the ballot.

This year, if you were unhappy with the incumbent candidates finally announced by OTEC in the March Ruralite, you might have wanted to try and get 50 signatures to get on the ballot. Too bad--you would have been out of luck, because the signed petitions had to be submitted by February 20th, several days before the candidates were even announced in Ruralite, and write-ins and nominations from the floor are not allowed. Cooperative democracy in action!


To The Editor:
Someone once noted that “the whole point of good propaganda” is that “You want to create a slogan that nobody’s going to be against, . . . Nobody knows what it means, because it doesn’t mean anything. It’s crucial that it diverts your attention from a question that does mean something . . . .”
Which brings me to the recent issue of OTEC’s Ruralite. Nestled amongst articles on county fairs and funerals was an article offering slogans aplenty and another highlighting the D.C. Youth Tour. These were meant to burnish the reputation of OTEC as a community-minded citizen, but careful reading reveals just empty slogans and half-truths.

The article “It’s a Matter of Principles,” contained 7 warm and fuzzy headliner slogans, but I’ll concentrate on the first: “The Power of Membership,” with translations along the way.

“local members call the shots” = if you can get through all the obstacles for getting elected as a well paid director, they will have to listen to you, otherwise forget it.

“We are accessible. You can call or email us and know someone here is listening.” = of course they listen, but they don’t have to respond, especially if you ask essential questions pertaining to rate studies or employee compensation.

Directors “have only two things in mind: . . . keeping the lights on and keeping costs affordable.” = except for bloated administrative salaries and pet projects like sending well-heeled teens to lobby in D.C., which despite OTEC’s repeated statements, does affect rates. Every penny spent on pet projects could have been spent on capital projects like substations.
Speaking of rates, OTEC’s were not raised but Idaho Power’s residential rates decreased by 3.27% recently, so many OTEC members would still be better off with Idaho Power.

As for my enquiries, OTEC would not even provide crucial information needed to understand whether they are treating all classes of ratepayers fairly or whether total compensation for various positions is adequate or extravagant. So no, as a member you don’t call the shots--your power is very limited. Looks like the uncooperative co-op to me.
Christopher Christie
Baker City

I'll fill in more of the details later, because the letters to the editor are constrained to 350 words, more or less, which is not sufficient to convey an adequate understanding of any issue. In the last letter I should have said most residential OTEC members would still be better off with Idaho Power.

Idaho Power is regulated to control costs and to bring rate fairness--OTEC is not.  It is a shame when we arrive at a place where unregulated  "cooperatives," which are intended to save users money because they are non-profit, end up costing ratepayers more that what they would pay at investor owned utilities. It is more of a shame when they won't tell members where the money is going. You have to rely on librarians and school teachers as board members to reign in the majority of rancher and farmer board members, but unfortunately they are not up to it, perhaps because they don't understand what is going on. The rates are tilted in favor of the irrigators, other heavy users, and those who live in the far-flung portions of the service areas at the expense of city residents. In addition, the board members are more interested in the public relations benefits of inventing special project give-aways that benefit wealthy members at the expense of the poor, elderly and single people who have no choice but to get their power from OTEC, than they are in controlling costs. Unfortunately, there is little you can do about it unless you can get on the board. There is no other electricity provider for you to choose. That is what OTEC depends on--your dependency! You have no choice.

More later on this and other issues. . .  please stay tuned!

Posted by Christopher Christie at 11:27 PM